I spent part of last Saturday carving pumpkins with the youngest of the grandchildren.  They were so excited to pick out patterns for the design, use a tracing wheel to trnsfer design to the pumpkin, and then cut with a small saw blade to expose the scary results.  I have to admit that Isabel did not like the "yucky" feel of the pumpkin guts which prompted some aggrevating from Jaxon.   Jaxon wanted to get out the big knife he was wearing on his belt and take care of the carving more quickly...vetoed.  The result, however, is that I have two lighted pumpkins on my front porch.   They are patiently sitting there waiting to be lit each evening.  It is a nice reminder of fun times.

Caron's daughter, Jessica, is making some wonderful costumes for her girls, Kate and Abigail.  I even got in on the action and crocheted a black cap for the pirate (Abby).  The costumes each have a tutu base so that even the swashbuckling pirate is quite feminine.  I haven't seen the end products, but I am sure that pictures are coming.

When the children were growing up, Halloween was a last minute deal.  We might put on old clothes to look like a hobo, or some wild garb and said it was a gypsy costume, but the favorite was to find a  worn out white sheet, drape it over them, and cut out some eyes as they left to knock on the doors in the neighborhood.   Once when I had Kevin down to the eye hole part, I used an unusally sharp pair of scissors and snipped part of his eye lid.  As I recall , I was worried about getting blood all over everything until I realized that it would just add to the Halloween effect.  Luckily his eyelid was not permanently scarred.  I caution you, however,  to cut the sheet before attaching to kid.

One of the cutest costumes we ever used was a Raggedy Ann costume created by Mary Ann Lackey and which we got to borrow for Lara.  She was so relieved that she didn't have to wear one of my creations that year.  And I can tell you that if Mary Ann created it, it was well-done.  I occasionally see some of her current handiwork and marvel at the beauty of the fabric art and quilting.

Now to the most creative pumpkin carving I have seen in a while.  We received this picture at the Hotel this morning from Sara Gray who lives in Schulenburg, Texas.  It is of Emma Gray and her pumpkin that has been created by using it for target  with her .22.  It seems like she has a wonderful aim .......and no messing with the "yucky" part.   I love this picture. 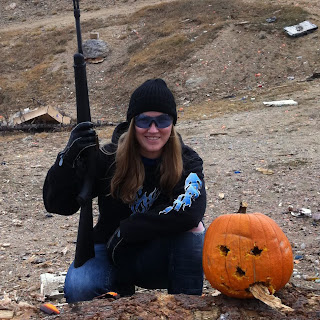 I really like to cook with fresh pumpkin.  It has such a mild, light flavor and color.  The bread made with fresh pumpkin is a beautiful apricot color.  My favorite way to cook the pumpkin is in the oven.   Instructions are simple:  Just half a 8-10 inch pumpkin, scoop out the seeds and pulp with an ice cream scoop, and bake it upside down on a baking sheet at 350 degrees until it is fork tender.  Let it cool before removing the pulp.  There is quite a bit of water in the pulp, so you might put it in a cloth to drain overnight so you won't have too much liquid in your recipes. If the grandkids are coming over, save the seeds to roast, or if you plan to plant your own pumpkins next year, put them in a bag in the freezer until planting time.

A sandwich of the bread with a filling of sweetened, spiced cream cheese would make a perfect starter for breakfast or a great afternoon snack.

Let me know your favorite way to use fresh pumpkin or to prepare the pumpkin itself.

Posted by Hotel Matador at 8:24 AM