Hurricane force wind with several inches of snow equals a beautiful courtyard, a warm living room, and some new friends. 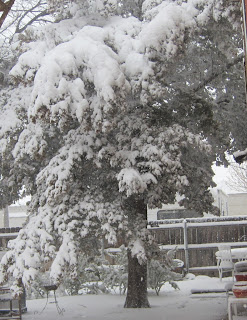 This tree that stands at the back of the courtyard and towers over the building was laden with some of the six inches of snow that we received yesterday. 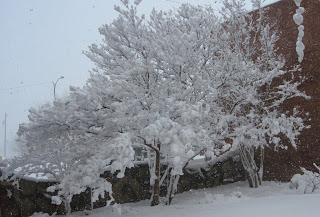 Crepe myrtles with a new type of white bloom.
To those in northern states this may look like a trifle, but to our parched earth, it is a wonderful abundance.
As the snow began to accumulate yesterday, people were anxious to reach their destination and settle in for a warm cup of coffee or hot chocolate and their favorite throw.  Some didn't quite make it, as the roads became dangerous and in some cases were closed.
One guest had his car blown off the road by the winds and had to abandon it and then get it towed.  He was on his way to a required training for his employers, but they gave him permission to arrive late.
Another man who was stranded delivers dialysis supplies to people who are confined to their homes.  He had to make many calls to reassure and comfort his clients.
A pipeline supply crew traveling from Louisiana to California couldn't make it any further than Matador and had to spend the evening watching television and eating chicken fried steaks at a local restaurant which stayed open to accommodate them.
One lady left Wichita Falls on her way home to Floydada, and anticipating a speedy and non-eventful trip,  she decided to travel in her pajamas.   At some point in her sliding toward Matador, she managed to don her clothes so she could seek a room.
Some travelers stayed in private homes, and one manager of some hunting lodges opened them for those who could not find rooms in the local lodging.
We hope that the travelers, as they left this morning, felt rested, well fed, and ready to face their renewed journey.
At Hotel Matador, this is why we are here, and why we were led to this place. 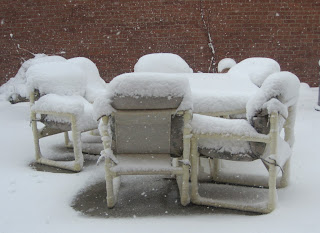 We will be warming up the chairs in the courtyard before your next visit.
Posted by Hotel Matador at 12:06 PM

New year Rishikesh package is all ready to make your special day awesome. You will get every flavor that you are opting for. The choices of the New Year packages in Rishikesh will be more also. So, don’t waste your time to think what to do, just check each of the packages and book your spot as per your need. You want the assistance on how you should select the one, then here is the write-up for you.

Caesars Casino Hotel - Las Vegas - MapyRO
The Caesar Hotel is the place to 여주 출장안마 be when you want to relax, stay at one of the 강릉 출장샵 finest casinos in Las Vegas. The casino is located 나주 출장마사지 on the 경상남도 출장안마 Las Vegas 보령 출장마사지

As such, Canadians have never been prosecuted for using offshore sportsbooks and the sportsbooks themselves have never been subject to investigation or prosecution of any sort. This led to numerous European, Caribbean, and 메리트카지노 Central American websites welcoming Canadian bettors over time, glomming all kinds of business from potential authorized operators. Following the adjustments from C-218, Canada can now maintain this income within the nation whereas overseeing all operations, making certain its players get probably the most gratifying and honest experience possible. Horse racing additionally be|can be} in style in Canada, with several of} tracks doubling as racinos.