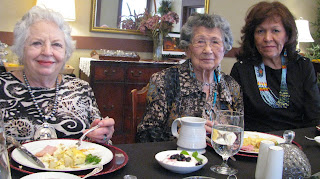 Patron of the jail project with ancestral ties to Motley County, Lou Diekemper and her daughter, Diane Burchard, drove down for the arrow sculpture dedication, making Matador as part of the Quanah Parker Trail. At breakfast they got to visit with the descendants of Quanah Parker: Ardith and Glen Leming, Anna Tahmahkera (granddaughter of Chief Quanah Parker), and Paul and Linda Davis. Lou and Anna decided they would like to be neighbors so they could share stories and each other’s company.


If you heard a rowdy crowd from the Hotel courtyard it was probably the reunion of the Delta Sigma Pi business fraternity from Texas Tech. They graduated from Tech in the early sixties. The meeting was hosted by Harry Hamilton with the help of Ed D. Smith and Tom Edwards. Here is a list of the ones who attended that I know about and where they are from: Joe Hargrove from Buffalo, Texas; Tim Stephens from Phoenix, Arizona; Fred and Marsha Pearce from Pecos, Texas; Allan Malone from Houston, Texas; Kirby Campbell from Wellington, Texas; Bruce Loughridge from Albuquerque, New Mexico; Sonny Choate from Granbury, Texas; Noble Hunsucker from Lubbock, Texas; Stan Treanor from Abilene, Texas; Robert Gardner from Vigo Park, Texas; Sandy Tolbert from Pelican Bay, Texas; Jerry Partis from Odessa, Texas; Tony Clayton from Coppell, Texas; Bob Fuller from Sneads Ferry, North Carolina; and Phil Worley from Burnet, Texas.

Melissa Meikis from Round Rock stopped Saturday night as a part of a motorcycle tour of Texas. On this jaunt, she is riding the Caprock escarpment of the Panhandle.

A nice surprise was a visit with Susan Hunter Smith, a former student from my teaching days at Motley County. She is an attorney in Austin and works with the Texas Education Agency. She and her husband, Steve, were in the area visiting with family and friends and garnering signatures so that he can be on the ballet in March. He is planning to run for the Texas Supreme Court after a career as an attorney working with the Texas legislature. Don’t you love it when you see people who are willing to step up and serve.

Others who came to relax in Matador last week were Dusty and Wanda Dupree of Lubbock, Betty Haisten, Tiffany Tobey of Lubbock, and Clay Wagner from Kendalis.

Posted by Hotel Matador at 1:37 PM

Fantastic to hear that this union happened.